Having good keybinds and a good interface for you is extremely instrumental to your PvM experience. With bad keybinds/interfaces, it’s easy to get confused and tied up in the heat of battle and die due to pressing the wrong thing at the wrong time.

This is by far the most subjective article here and everything said should not be taken as law, but rather as simple advice. Keep that in mind as you read.

Each person has their own bars with their own keybinds to fit their playstyle. Here are example bars of my own to give you an idea:

First things first. These bars are absolutely trash in Revolution, so if you’re looking for a good Revolution bar these are the absolute worst examples for it. Ideally you shouldn’t be using Revolution in the first place, but we’ll get to that later.

With that out of the way, camera control for me is mapped to WASD, so mapping keybinds to WASD is a no-go. As such, I have to be more inventive with keybinds – I use Shift commands over those four keys (and more).

You may have noticed that I don’t have a lot of abilities within my bars. That’s because I have another bar for more stuff within that style here:

Like the main bar, they occupy the same space in my interface. When I switch styles, I simply change action bars along with the main bar, so it looks something like this:

There are more keybinds that I use like these: 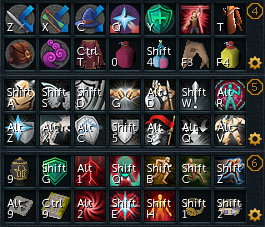 Ultimately though, they’re mostly not part of DPSing, but rather defensive play with shields/defenders, which is another discussion to be had. However, they carry abilities that work for all styles like Tuska’s Wrath and Sacrifice, so you don’t need to waste slots on your main bar.

Now that’s me personally. How I’ve worked with these keybinds is using the default keys (1 to 0 on the number bar), then slowly altering them to fit where I rested my hand better. I rest my hand at WASD, then I slowly bound the key things surrounding WASD like prayers and bar switches on keys like Q or E or Z.

That’s honestly really the biggest tip to making keybinds: check where you rest your hand and feel around which keys are the easiest to press. Are you able to hold down Shift or Alt down while pressing another ability? Can you reach this key like second nature? These are all questions you answer yourself.

Optionally, you can also invest in a gaming mouse with additional buttons beyond left/middle/right click. This opens up so much more possibilities in how you customize your keybinds. You can put modifier keys (Shift/Alt/Ctrl) on your mouse so you don’t have to move your pinky to hit them, or put even more abilities or binds on the mouse. I personally put some miscellaneous stuff like special attack and gear swaps on my mouse and leave my left hand to handle prayer swaps and ability usage.

My personal choice of mouse is the Logitech G502. While it doesn’t have a “huge” amount of buttons (it has eight extra), it has enough for what I use and it’s very comfortable to hold. It’s also fairly affordable, cheap, and sized fairly well, so you can’t really go wrong with this mouse.

Other mouses include the Razer Naga and Corsair Scimitar for even more buttons (at a higher price). These are traditional MMO mouses mostly used for other games aside from RuneScape, but you can still use these to keybind nearly everything you want. You can even keybind your basics and thresholds here if you think you’ll do better with pressing from mouse rather than keyboard. They’re also not too big, so they’ll be a good fit for nearly everyone, even if you have small hands.

A special mention goes to the Logitech G300. If you’re REALLY on a budget, this mouse is great as it’s extremely cheap while still offering its own way of flexibility. Offering only two less buttons than the Logitech G502, if you’re looking for a more traditional mouse while still retaining additional buttons at a low price, this is the mouse for you. Be warned that this mouse is extremely small though, so if you have big hands this is not the mouse for you sadly.

Now that you’ve got your first set of keybinds, it’s time to put them into use. The first best place to test out keybinds are at dummies. Get on a dummy and start wailing away at it with all of your abilities and get a feel for which keybind does what. The purpose of this practice is to build muscle memory with your keybinds so within time using abilities and such manually comes off as natural.

A common pitfall Revolution users have trying to practice full manual is they first try to practice full manual at bosses that can fight back but end up with dying or doing much less DPS because they’re thinking too much on their key presses rather than the boss itself. That sort of environment is not ideal to learn manual, so instead you need to practice elsewhere like Slayer or trash bosses like GWD1 or GWD2. Even if you struggle there, keep trying. Learning manual takes time, it’s not something to instantly grasp within an hour. Newcomers learning manual will need a few weeks, maybe upwards a month at most to fully grasp full manual at worst case scenarios. In reality though, it may only take one or two weeks to really get used to them.

The rewards and advantages of full manual is very well worth it. Not only are you likely to understand your keybinds and such much more easily, but:

Like keybinds, this is also all on personal preference. This also depends on what type of screen resolution you have. I play on a laptop, so I’m limited on space for what I can display. The bigger your resolution, the more interfaces and the like can be placed, but be warned that too much things can also be a big clutter. Obviously practicality is more important over looks, but a big chunk of practicality comes from displaying as much as you need without interfaces being overly big.

To get an idea of what kind of interfaces are nice, here’s some example interfaces to either copy or modify or be inspired by. 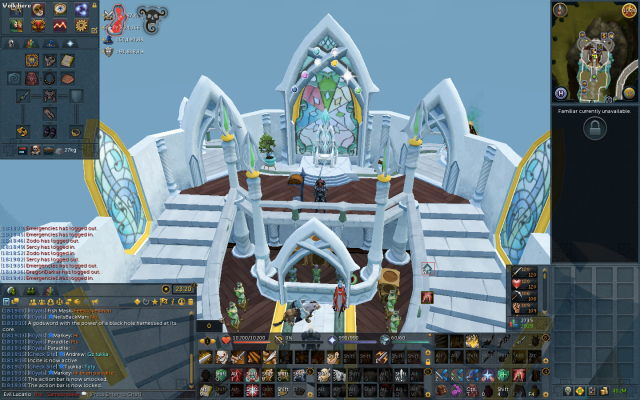 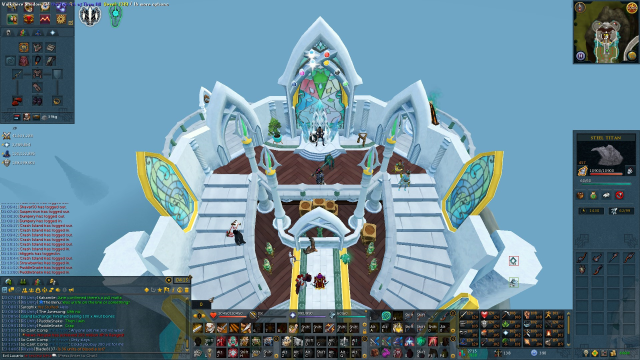